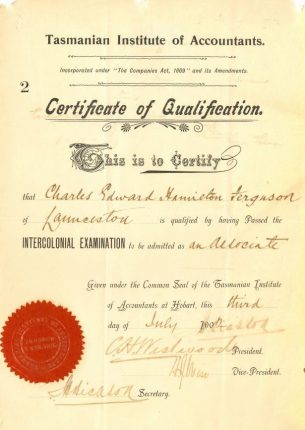 Mr Henry Joshua Wise held the role of Vice-President with the Tasmanian Institute of Accountants.

It was during his tenure as Vice-President that Mr Wise signed the Certificate of Qualification for a young Mr Charles Edward Hamilton Ferguson of Launceston, recognising he had passed the Intercolonial Examination and admitting him as an associate of the Institute.  Twenty years later, Mr Wise and Mr Ferguson would go into Partnership.

In December of the following year Mr H J Wise was elected to the role of President.